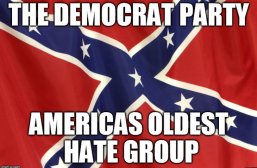 pathological uncontrolled hatred. It never left; that hatred has always been there in the Democrat Party members’ hearts, just hidden away where the rest of us couldn’t see it. 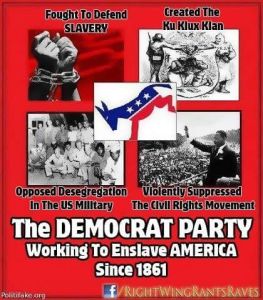 The Communist-Democrat Party supports criminals for just one reason: They are criminals, too. Whenever anyone advocates for socially unacceptable behavior, it’s because they, too, are guilty of socially unacceptable behavior. We might not see it, because criminals keep their crimes a secret for as long as possible. They know what they’re doing is wrong – that’s why they hide it, but they believe that by advocating for other crimes to be allowed (legalized), their effort will ultimately draw them closer to making their own crimes legal.

They fought for Slavery because many of them hated Blacks. They formed the KKK, because they have no moral or ethical anchor (like the Bible or the Torah) which dictates societal mores, morals and ethical standards. Because they are Godless folks, many of them couldn’t care less about right and wrong because many of them have been turned over to a “reprobate mind”: People who reject belief in God do so of their own free will, even though they are without excuse since God’s existence is obvious (Rom 1:18-20), so “…And just as they did not see fit to acknowledge God any longer, God gave them over to a depraved mind, to do those things which are not proper;” (Rom 1:28 KJV), and after a while, they can reach a point where “God sends them a strong delusion, so that they may believe what is false” (2nd Thess 2:11).

It’s called a “depraved mind” and a “Reprobate Mind” because people don’t recover from it. That’s why there is no use arguing with our Liberal friends: They can’t hear us and they can’t change their minds. Once the Lord, who they have rejected, turns them over to a Reprobate mind, it is finished for them. They will be stuck in their hateful thinking for the rest of their lives, barring a Holy Spirit intervention.